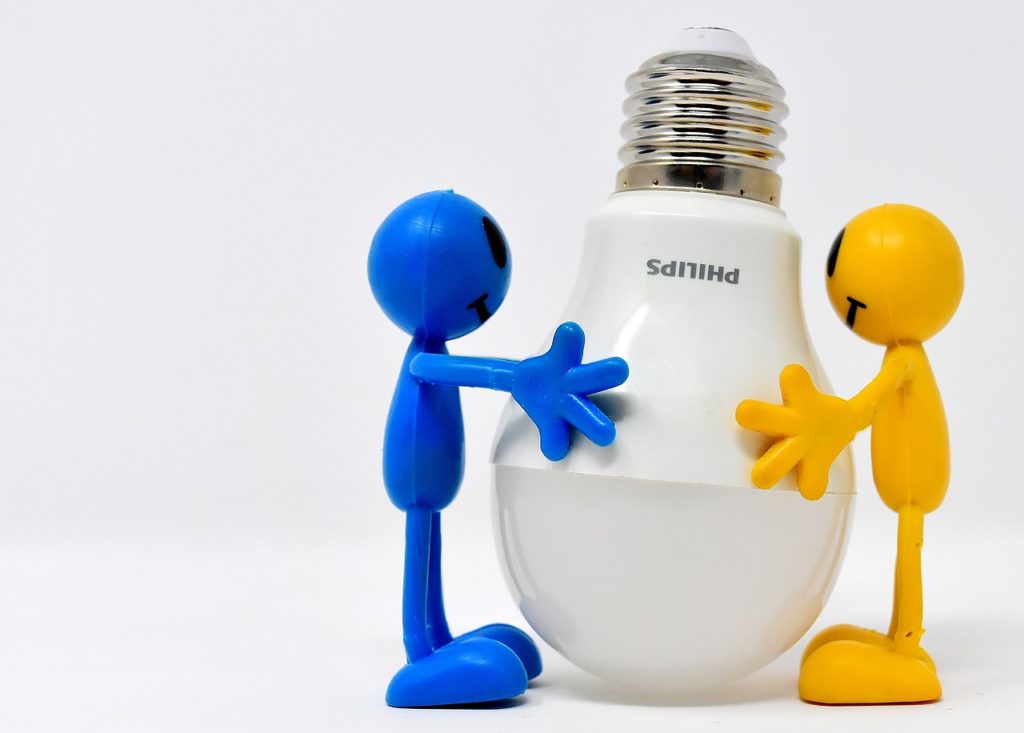 Halogen light bulbs will start disappearing from shelves from the end of this month following an EU-wide sales ban.

Although new LED bulbs are more expensive to buy compared with halogens, businesses and households will be able to make savings in the long-run through energy efficiencies.

Early tech adopters might even be tempted to spend the money that they save on electricity on a new ambience-adjustable smart lighting system.

Lighting manufacturer Philips estimates that the average UK home has 10 halogen bulbs that will eventually need replacing. That’s almost 300 million bulbs that will soon need to be replaced in the UK.

But research from LEDvance shows that very few people actually know about the halogen bulb ban. Their survey found that two-thirds of Brits had no idea that halogen bulbs would soon be on their way out.

So, what is the best way to go about replacing your bulbs? Will you have to switch them all over in one swoop? What are the cost implications? And should you skimp and save on new LED bulbs or splash out on the latest and greatest technology?

We try to answer all these questions and more in our blog post.

The halogen ban is part of an EU-wide effort to improve energy efficiency and cut carbon emissions.

And it isn’t the first time they have banned bulbs. They stopped the sale of energy-intensive incandescent bulbs in 2009 and created legislation to ban halogens in 2016.

Shops will not stop selling halogen bulbs immediately. They will be allowed to use up any stock they have.

There is also no requirement to change all the bulbs in your home from the 1st of September. You can wait until the current bulbs expire.

But given the cost of running halogen bulbs compared with LED alternatives, there might be a case for switching your bulbs sooner.

The Energy Saving Trust estimates that a typical halogen bulb uses around £11 of electricity per year. LED bulbs use a fraction of this energy, costing around £2 per year. In a typical house with ten bulbs, you can save more than £90 per year by switching to LEDs.

LED bulbs also last longer than halogens. Some of the best LED bulbs will last for 25,000 hours of use – this could be as much as 15 or 20 years depending on how often you use your bulbs. A halogen bulb, meanwhile, is likely to only last for 2000 hours.

The Energy Saving Trust does recognise, however, that LED bulbs are slightly more expensive. And switching all your bulbs at once could be too high of an initial outlay.

“Replacing all your halogens with LEDs at once may well end up being a significant financial outlay, so it’s worth doing it in stages and gradually seeing those long-term benefits,” they say in a blog post.

The LED bulb is still new technology, but they have come on a lot in recent years. One of the most common complaints about early LEDs, was that LED light was too cold.

Unlike warm or ‘orange’ halogen lights, LED light is often white or ‘blue’. These bright colour temperatures are harsh and some scientists have raised concerns about their safety.

For example, health officials have warned that LED streetlights may disrupt peoples’ sleep and damage eyesight.

Other scientists have suggested that LED streetlights could be linked with an increased risk of developing breast or prostate cancer, because the cool light can affect hormones.

If you want warmer coloured lighting, you should look for bulbs that are around or less than 2700K. Philips described this colour as ‘Warm White’ and they include a picture of what it may look like on their website. You can also go lower than this with LED filament bulbs at 2400K Flame coloured light.

First things first when choosing a new LED bulb, you need to make sure you buy bulbs that fit into your fixtures. Whatever shape your old halogen bulbs are, you are sure to be able to find an LED bulb that will take its place.

Not every LED bulb is created equal. And there are some other important decisions that you need to make when you’re choosing a new bulb.

LED lighting has fallen significantly in price in the last few years. Even basic LED bulbs would set you back £20 a decade ago.

As the technology has improved, the lights have come right down in price. But there is still a gap between the cheapest and lowest quality bulbs and those that are a little more expensive.

Cheap bulbs are not likely to last as long, the quality of light they give out is not likely to be the same and they are unlikely to come with a warranty that protects you if anything does go wrong in the first few years.

At the top end of the technology spectrum you have innovative smart lighting systems.

Smart lighting offers the maximum functionality, including colour changing bulbs, brightness controls and central hubs that can be used to create the perfect lighting ambience in a room. Some smart lighting solutions even allow you to control settings from your smartphone.

Full smart lighting solutions are offered by companies including Phillips and Hive and can be bought at all good technology stores.